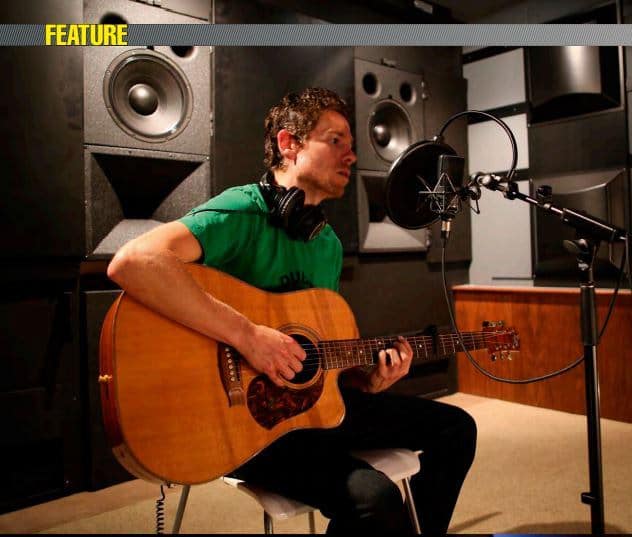 Wavetrain Cinemas has begun a second life  as Wavetrain Studios, with the recording of Mark Wilkinson’s ‘Let The River Run’…

We have featured several designs by Wavetrain Cinemas in the pages of Sound+Image, including one at Wavetrain’s headquarters in Sydney — a dedicated home cinema named ‘The Statement’, built as a demonstration of the company’s command of room acoustics and dedication to the art of audio and video reproduction.

There is also a second larger space called the ‘PRO cinema’, which has some special characteristics in keeping with its role as a centre for the company’s training courses in acoustics. But now Wavetrain has turned the room’s purpose entirely on its head by recording music in there, transforming the ‘PRO cinema’ into a recording space and the ‘Statement Cinema’ into a control room.The first results from this new ‘Wavetrain Studios’ were released on CD last year by Australian singer-songwriter-guitarist Mark Wilkinson. The album is called Let the River Run.

One of the elements that made the ‘PRO Cinema’ such an interesting candidate for conversion to recording rather than replay is the room’s adaptable acoustics. This space was designed by Wavetrain Cinemas to teach acoustic design and demonstrate the differences that can be achieved by removing or adding acoustic treatments as required. In cinema mode this teaches custom installers how to best optimise a room for the clearest sound across a range of seating positions.

But at the front end of the recording and reproduction chain it allows an artist or producer to consult with Wavetrain’s Director and acoustic guru David Moseley on the exact nature of sound required, with the acoustics of the room then able to be tuned accordingly, delivering just the desired recording environment. “So depending on the requirements we can lay the timber floor or lift it back up, plus change all the acoustics in about 20 minutes,” says Moseley, who is Director of both Wavetrain Cinemas and Wavetrain Distribution.

He says he was keen to be involved when the project was suggested. “The opportunity to apply my knowledge of small room acoustics to a new field was an exciting proposition and one I couldn’t pass up. In our home cinema business we are an appointment-only company and not a retailer, so we usually know in advance what the room is to be used for, and could manage the changes without inconveniencing anyone. It worked well through the recording process.”

This level of acoustic flexibility is rare even in major studios overseas and probably unique here in Australia, according to John Mulligan from Studiotech, who services many of Sydney’s top studios and who assisted Wavetrain in the change from replay to recording venue. “Most studios get selected for a specific album based on the sound signature of each recording space. To be able to adapt acoustics to the recording is invaluable.”

Mark’s first release was the Cellophane Life EP, followed by his debut album, Truth Came Running, in 2011. As an independent artist Mark has carved out a career the oldfashioned way — touring, busking, and opening on arena and theatre tours nationally for names including Brian Wilson, Chicago, Peter Frampton and America. He has also entertained deployed troops in the Solomon Islands.

For Let The River Run, Wilkinson teamed up with The Cat Empire’s Ollie McGill as producer, and was delighted with the recording venue. “It was a fantastic experience recording this album at Wavetrain,” says Mark Wilkinson. “The state-of-the-art facilities really allowed us to bring the best out of the songs.” Wavetrain’s David Moseley has admired Wilkinson’s work for a while, and this new album was the catalyst for the studio transformation.

“Mark is a true artist, and it’s great to see how this album has been received,” says Moseley. “It’s just a matter of time before the rest of the world catches on.” Moseley himself is credited with backing vocals on the album, as part of the “Army Choir” on a song called ‘When The Armies Arrive’. Were these his first recorded vocals? “First and last”, laughs David. “My wife couldn’t believe they let me sing.” Mastered at Abbey Road After recording at Wavetrain, producer Ollie McGill mixed the Mark Wilkinson album at Ivory Lane Studios in Gosford before handing the final result off to Geoff Pesche at Abbey Road Studios in London.

“The engineer, Geoff Pesche, had mastered the latest record for my band The Cat Empire,” says McGill, “and I was really impressed with the results.” Mark Wilkinson adds, “Geoff had also worked on some significant records from the likes of Coldplay, Adele, and Ed Sheeran, that sound fantastic and I thought were fair reference points for what we were trying to achieve. The fact that it was mastered at perhaps the most famous studio in the world was just a bonus.” Since the release of Let the River Run, Wilkinson has climbed to number one on the iTunes Singer/Songwriter chart and spent over a month in the ARIA Australian Singles chart.

He has been touring Australia since the album’s release and his website (www.markwilkinsonmusic.com) reveals his biggest tour yet, a hectic schedule through to the end of May. And for Wavetrain? “The studio is constantly in use,” David Moseley tells us. “Mark Wilkinson is working on his next album and experimenting with new sounds. My goal is to support up-and-coming artists and allow them the opportunity to express themselves without the worry of paying for studio time. It’s been an interesting response to what I am doing. The artists, producers and musicians generally are suspicious of my intentions until they realise I have no expectations- I love being involved! Whether they succeed and breakout to become a major recording artist is irrelevant. all of these artists are pursuing a dream and you cant put a price on artistic expression”