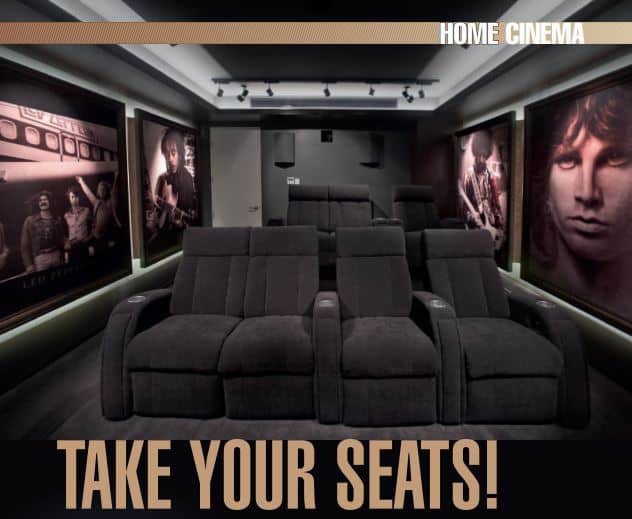 Top-quality equipment and the highest standards of Australian home cinema design deliver this stunning seven-seater theatre with an emphasis on music.

The owner of this impressive home cinema thoroughly enjoys his movies, but his real passion — as you might guess from the decorations — is watching concerts. And given his preference for classic rock (we note the image of Led Zeppelin in front of their Starship Boeing 720), custom installer Home Control & Audio prepared a particularly powerful audio brief.

“The main focus for the cinema was to provide superior sound and picture quality,” says Home Control and Audio’s Matt Doble. “With this client’s particular requirements, the cinema was designed to meet a high SPL specification of 110dB peak playback, and to achieve this, large 500W monobloc amplifiers were installed, together with efficient speakers and powerful subwoofers.”

Movies from the vault As is almost de rigeur in a high-end home cinema system these days, a key source is the Kaleidescape Blu-ray vault, which can store DVDs and Blu-rays (and CD music) for immediate access on the big screen. In an interesting twist, however, the owner had two of Kaleidescape’s players installed — one compatible with Australian discs and the other with US discs.

“The client loves the fact that he can buy his Blu-rays either locally or internationally,” says Matt, “and also that with the Kaleidescape system he can create music video playlists from any concert and avoid all the loading of menus and titles.” Other sources include an Oppo Blu-ray player, Austar pay TV, AppleTV, and free-to-air, while the projector is a Sim2 Nero 3D used with a Xiet cylindrical anamorphic lens and a Cineslide lens sled, thereby filling the 150-inch 2.40:1-ratio SMC screen, while also able to project straight 16:9 content using masks at the sides of the screen.

Home Control & Audio called in David Moseley, acoustic engineer at Wavetrain Cinemas, to work on sound isolation and room acoustics, the air conditioning, and also to develop the room theme. “The engineer worked closely with the client and also tuned the cinema at the end of the project,” says Matt. “One of his early requests was to resize the cinema slightly, with the AV equipment moved outside the cinema to what became the automation room for the entire home [this include whole house automation, digital media distribution to seven TVs, and iPad control of everything]. The automation room has its own air-conditioning to keep all the equipment cool… the projector hush box also vents to this room.” Although the client had decided in advance that sound isolation was not a significant issue, the projector ‘hush’ box’ is just one element in some careful sound treatment to ensure the cinema room itself allowed maximum performance.

The floor is floating, with two layers of structural plywood screwed and glued together with QuietGlue to isolate the floor; the wall structure is similar. An air-conditioning system designed to a whisper-quiet ‘NC20’ (just 22dB at 1kHz) allows for maximum dynamic range and a very low noise floor. Airlock doors were custom designed to match the room’s sound isolation value (as these penetrate the concrete shell).

Speakers and subwoofers were mounted on Kinetic ISOMAX mounts to ensure that vibrations are unable to get into the room structure, and custom curved diffusers were built to mount the front speakers, The whole rear-seating platform is designed as a custom bass trap. while MSR and CinemaWorks acoustic panels were installed at precise locations beneficial to the sound in the room. “These elements together allow a large, accurate sound stage while still maintaining the life in the room,” says Matt. “The seats were positioned to avoid standing wave nulls and shared problems, which then make for a much simpler room tune. The outcome is remarkably tight bass, clear concise dialogue, a dynamic sound with no strain, and surround sound that is truly encompassing.” There are three subwoofers in all — one Triad Platinum at the front and twin Triad Silvers at the rear, carefully positioned to negate the five potential standing waves within the subwoofer frequency range.

These support a seven-channel system of Triad Gold in-wall front speakers and on-wall surrounds, driven by the aforementioned grunt of the Cary power amplifiers. Aside from the design of the side-panels, there are lighting scenes for entering and exiting, ‘movies’ and ‘music’, and an all-on 100% ‘cleaning mode’ to pick up the left-over popcorn. Full integration via a Crestron CP3 processor is available, since this cinema is part of a fully-automated home with digital media distributed to seven screens in addition to the cinema, and control via iPad using Crestron’s control app. Perhaps unsurprisingly, we’re told by Home Control & Audio that the clients are “over the moon with this stunning result.”