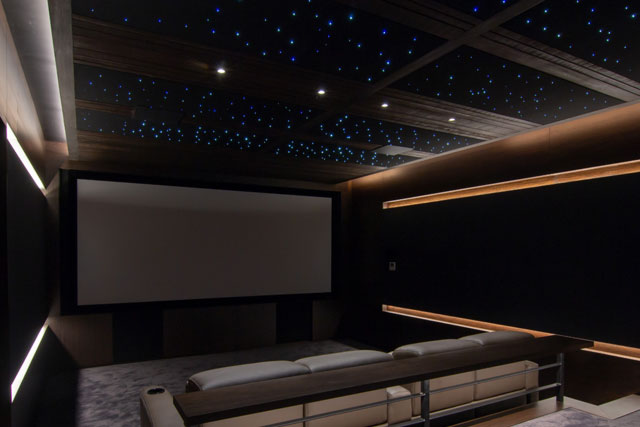 The owners of this home were looking for a cinema that would light up the night but would not go ‘bump’ in the night. That is, they wanted a booming sound system and a starry-lit ceiling that would not wake the kids. The design of the air-conditioning system was a major key in making this a reality and required a sharp attention to detail because even a single power point not sealed correctly would halve the sound isolation performance.

As a turnkey cinema company, Wavetrain Cinemas was able to manufacture and install various A/C products and custom sound isolation doors to ensure that moviegoers would be uninterrupted by outside noise, and the rest of the house would be able to function without distraction. For the audio system, Wavetrain Cinemas chose Elementi Audio for its digital active, concert grade speakers capable of playing at a continuous level of 105dB with 3dB of headroom. The client wanted eight seats in the cinema with the option to upgrade to D-box in the future, so D-box ready seating was used on the rear row. The focal point of the room, the screen, is 165″ wide with a 2.35:1 aspect ratio capable of achieving 100 nits of screen brightness—a necessity in creating a true HDR image in a cinema environment.

The judges called the Starlight Cinema “an all-around strong entry with neat internal rack wiring and careful consideration for the HVAC and venting arrangements.”

Shortly after this project was completed, Wavetrain Cinemas was called back by these clients for further upgrades to their home, including sound isolation all throughout—their main objective from the beginning.