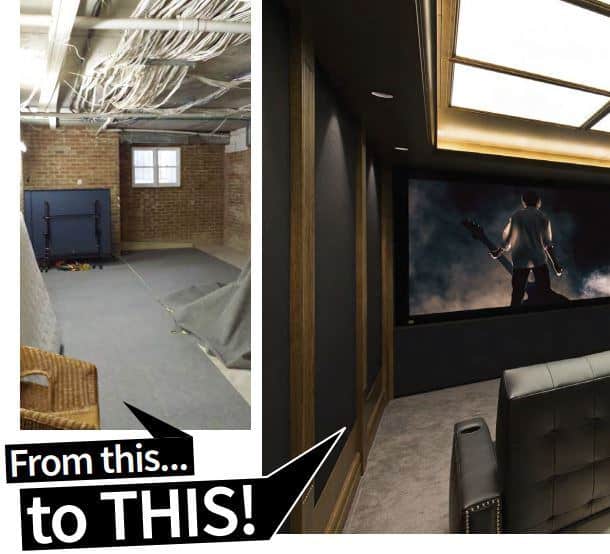 How many homes have an unused room? A ‘spare’ room, used for storage, or a kids’ rumpus room for kids that have grown and left home? Here’s a fine example of what can be achieved in such a space — this unused storage room in a home bordering the Hawkesbury River north of Sydney was transformed into a state-of-the-art home cinema by David Leisk Electronics (DLE) and Wavetrain Cinemas.

“The client was referred to David Leisk Electronics by a friend,” Wavetrain’s David Moseley tells us. “It was an existing home that they bought and wanted to update, including a backyard renovation and a cinema room.” “We were doing other AV systems and building an enterprise-grade network before they moved in,” explains David Leisk. “The idea came from the client — to make use of this big unused storage room in the middle of the home.

So the cinema construction happened about a year after the initial work was completed, but was conceptualised and developed during handover of the initial works.” From club lounge to cinema…   Initially the concept was for a ‘smoking club lounge/library’ for watching movies. “They’re a fun-loving, very social and friendly family,” says Leisk. “They were looking for a special room to share together and enjoy movies with family and friends. But it was also important to isolate the room from the rest of the house,  so that those inside wouldn’t be disrupting anyone else in the home.”

“The joinery cost for the club lounge concept would have been very high,” says David Moseley. “Of course the equipment budget, while more than adequate, would have been much less. But when the client came into Wavetrain for our usual three to four hour first consultation, they decided to flip the emphasis and go for a full digital active audio system capable of playing to 110dB peaks at the seating positions — for concert-level playback, and with a three-chip DLP projection system.”

So the interior design for the cinema was scaled back to being a simpler, classical design. But with Wavetrain being a design house as well as a cinema company, they also offered options to lift the room design, especially in the hallway (pictured below). These included French antique parquetry, velvet fabric wallpaper from the Royal collection (used in Buckingham Palace), wall sconces on custom timber wall plates, and a gold-gilded poster lightbox. 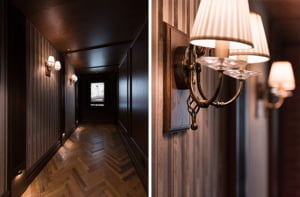 The cinema also has some special design touches, including the idea of creating a golden glow to the cinema. “It’s hard to pick in the images,” says Moseley, “but the ceiling is actually backlit brass mesh, sandwiched in semiopaque acrylic. It gives off this amazing light. And we were given free range to add interior design elements as required to finish off the design — small elements such as the tassle on the entry door, the lamps, custom-made fabrics and the baby Alpaca throw rugs.” But before the trimmings could be employed, some serious restructuring work would be required to create a suitable cinema space from this basement area filled with electrical, airconditioning and hot water systems.

We needed to construct a room within a room, both to deal with the sound isolation details and to make the room rectangular — it was a bit all over the place,” says Moseley. “We needed to build in future access to the cabling and also to miss pipes, which was partly why the ceiling design ended up as it was — all that being diverted away from the centre of the room to allow the backlit ceiling to go higher. And as is the case in most projects, air-conditioning was a big issue to be resolved. We needed to fit in a full ducted system to deal with acoustic issues, and with fresh air intakes and outtakes since you can’t draw fresh air into a pressurised room.” The constraints of the room made this a complex piece of AC design, with a fan coil above the ante-chamber/hallway in a drop-down section between the beams. “The ducts from there run in and out of the cinema, plus in and out to the outside air,” says Moseley.

“We created a cavity behind the screen and placed a fixed linear grille in the top of the window for this purpose.” David Leisk gives credit to his various collaborators in the trades required. “We have a long-time association with Cunningham Building Solutions,” says Leisk. “They did the initial frame-out and managed the other trades like the electrical [Synergy Electrical Services] and air-conditioning [R&J Air], as well as working closely with the fit-out joiner from Becker Joinery. Our company liaised closely to provide support and management — the necessary checks and balances to ensure a quality finished product.”

Wavetrain specified the speakers, amplification and projector equipment based on those initial criteria, while all the AV installation, sources, control and racking was undertaken by David Leisk Electronics. The projector is 3D-capable — was that a specific request? “Pretty much every client when asked if they want 3D says no,” says Moseley. “But almost every client when we show them true 3D says yes. If you haven’t seen 3D video with a three-chip DLP projector, please do so. The projectors are not inexpensive — but then nothing exceptional in life is.”

Just as the air-con was designed to operate silently, the projector was placed in a ‘hush box’, to lower the noise floor of the cinema. “This increases dynamic range without having to increase the volume,” explains Moseley. “Dynamic range is the number one criterion for sound quality — it’s what we react to first in any audio or video system… in video we call it contrast ratio. This system is designed to play at Cinema Reference with peak levels of 105dB and Concert level with peaks of 110dB, and that dynamic range can only be improved by lowering the noise floor.

So that applies to the AC, the projector hush box, and the main equipment rack, which we typically place outside the cinema, to eliminate not only noise but also heat and light in the room itself. ” The amps and speakers are all from the California-based professional home cinema company Pro Audio Technology. “This is a full digital active compression driver system — each driver has its own amplifier, and can be tuned via digital DSP,” says Moseley. “There simply is no distortion at any volume you could listen to the system playing, and the sound detail is a revelation.”

The best proof of success is always that the new cinema room gets plenty of use. “It’s a universally loved showpiece room,” confirms David Leisk. “It’s used by the whole family — the husband is an avid music fan and loves to use the room to watch live music concerts on Blu-ray, while the wife and kids love watching movies from big-action blockbusters to family-friendly romcoms.” “The client is stunned by the final result,” adds David Moseley. “And it’s funny it gets used so much for music concerts, because that wasn’t a core requirement of the project until the client visited Wavetrain. It was only after experiencing what we call ‘Concert level’ that it became a driving force as an outcome. It’s satisfying to know a client is using the space more than they ever thought possible — that means we have done our job”.