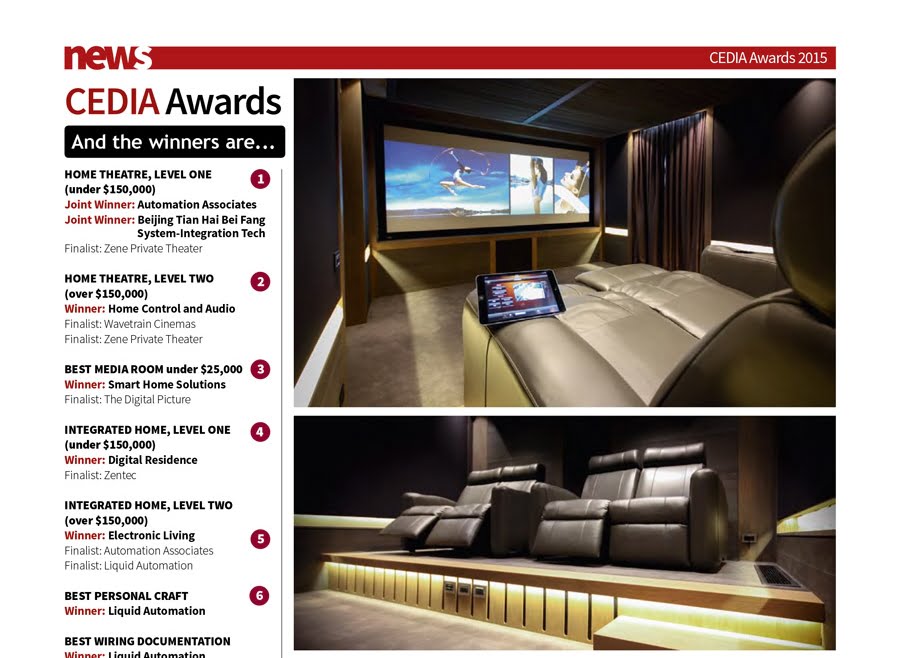 It was all change at the CEDIA Awards this year — entries for the finest custom installation projects in Australia, New Zealand and the wider Asia-Pacific region were all submitted through the U.S. head office of CEDIA, where they were judged by a committee of U.S. luminaries before the winners were announced at a local CEDIA event in Melbourne, held to coincide with the Integrate Expo there in late August.

Regular readers may recognise some of the winners here as entries that were also made in the previous 2014 Awards — some projects had been updated, but others were allowed a second ‘go’ following the decision to change the whole submission process for 2015. The category list is curtailed for 2015, with only two categories of Integrated Home (above and below $150,000) and two for Home Theatre (also above and below $150,000), plus categories for Best Media Room under $25,000, Best Personal Craft, and two documentation awards, one for wiring and one for AV Documentation. The usual gongs for ‘Winner’ and ‘Highly Commended’ have become ‘Winner’ plus ‘Finalists’. No awards were given this year for Showrooms, commercial work or ‘Special Projects’. Our thanks to our friends at CEDIA and congrats to all the winners, some of whom we hope to feature in detail in upcoming issues of Sound+Image.

THE CEDIA AWARDS recognise the finest custom installation work delivered each year by members of CEDIA — the Custom Electronic Design & Installation Association. CEDIA is a global entity, with our region including Australia, New Zealand and the wider Asia-Pacific area, including China. The winners represent the state of the art in home cinema and smart home design — pictured is the theatre and music room from the home that won Brisbane’s Electronic Living the top Integrated Home award this year.

WAVETRAIN’S amazing ‘Matrix’ home cinema was a finalist in the Home Theatre Level Two category, recognising the fastidious design and top standards of fit-out by Wavetrain and Instinct Electrical, including themed ‘digital’ wall art from Warren Macris, and an adjoining bar that takes design cues from the ‘Cube’ Canadian sci-fi thrillers.

SMART HOME SOLUTIONS worked with Wavetrain Cinemas on the acoustic package for the winning Media Room, overcoming the difficulties of hard floor tiles and a bar at the rear to achieve reportedly brilliant results with audio using an Integra receiver and Triad Bronze speakers, and video on a 96-inch SMX screen.

AUTOMATION ASSOCIATES is one of the entries making a return from the 2014 awards, this time winning the gong for Home Theatre Level One (under $150,000). It’s a cinema carrying the hallmarks of Wavetrain Cinemas’ careful sound isolation, extensive acoustic treatment and high level of equipment — this room was part of a whole home installation by AA.

HOME CONTROL AND AUDIO won CEDIA’s top Home Theatre category with this spectacular cinema designed in collaboration with Wavetrain Cinemas. The music concert-loving owner has since had its performance upgraded to a 7.1.5 system running from a Trinnov processor capable of delivering not only Dolby Atmos soundtracks,but Auro-3D and DTS:X as well. Impeccable room treatment combined with reference-level performance to take out this key award.